Twas the night before Christmas, when all through the house
Not a creature was stirring, not even a mouse
The stockings were hung by the chimney with care
In hopes that St Nicholas soon would be there

from Twas The Night Before Christmas by Clement Clarke Moore, my favourite poem at this time of year. 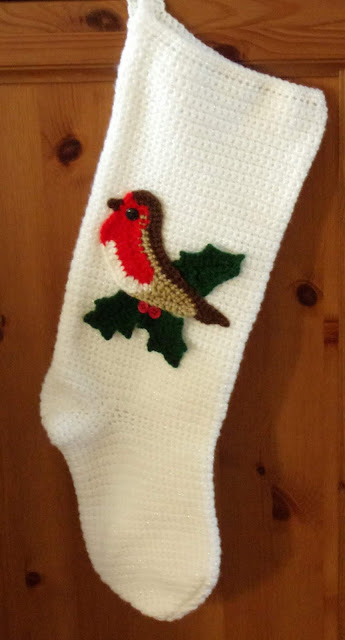 I made this stocking for my Mum, who loves robins, last Christmas Eve but it was too late to show you by the time I finished it that evening, just in time for her to hang it up.

I adapted the Red Heart pattern I wrote about when I made a little photo tutorial as this yarn was slightly finer. I used a white acrylic yarn with a glitter thread running through it to emulate crisp, glittery, frozen snow. I just love it when snow is like that and not the wet slushy stuff we get so often. Isn't it lovely going out in pristine snow and hearing your footsteps crunching through it as you go along? 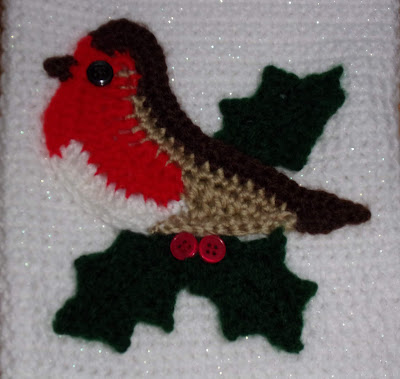 There was always only ever going to be a robin to decorate this stocking, nothing else would do but it had to be a flat motif I could applique. I didn't have a pattern for the robin so made it up as I went along. I added a small black button for an eye, three of  Lucy from Attic 24's holly leaves and two little red buttons as berries. It was all stitched on to the stocking and voila, a robin and holly stocking of which I am rather proud. 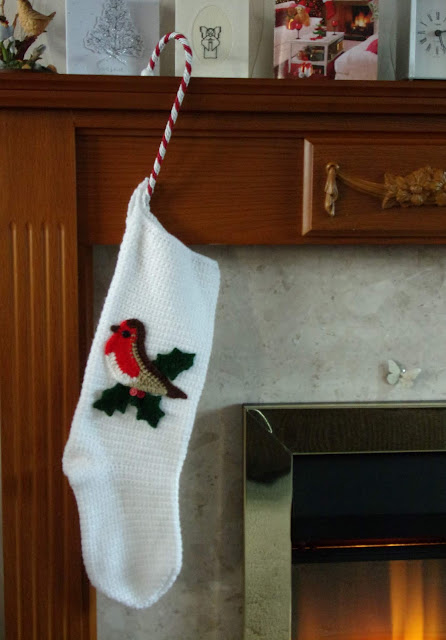 Mum loves her stocking, hanging from a candy cane stocking holder on her mantel.


I haven't blogged this year as I haven't been able to crochet much, I hope this changes soon as I have several unfinished projects waiting for me and I'm itching to get back to it. Thank you for popping in to check out my blog and your patience during my extended  break.

Wishing you all a Merry Christmas and Happy New Year.

Where does the time go, I always seem to be playing catch up at this time of year as it seems no time since I was writing about my autumn projects (more about them later). As storm Caroline passed over last week bringing freezing temperatures and just a tiny snowfall here afterwards I took some time out to to enjoy a lazy afternoon with a glass of mulled apple juice, a small crochet hook and some Christmas cards. 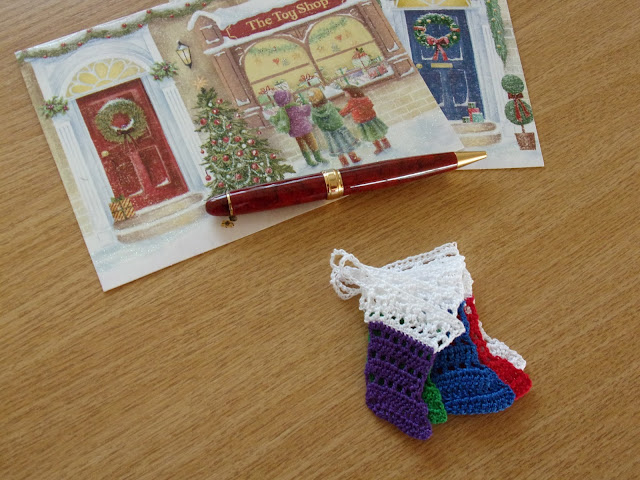 Yes, it's that time of year again when I like to write my cards and slip a little crocheted gift in some of them and this year it's all about stockings. I dug out all my fine crochet cotton threads and piled them on the table to choose what colours would make the most Christmassy stocking decorations. 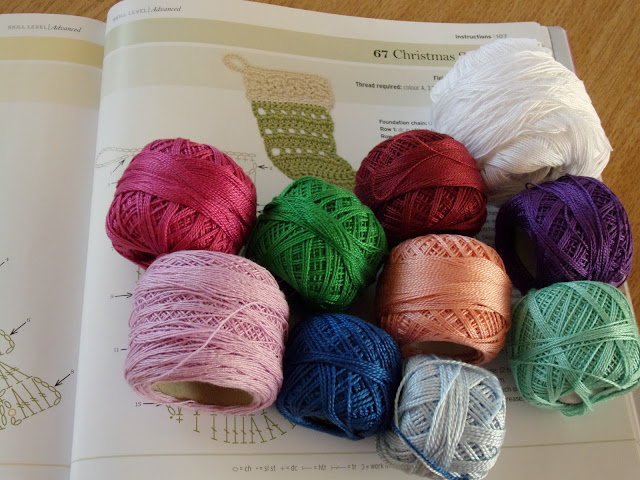 Red and green were a given and I couldn't resist  the rich purple and royal blue cottons too with just one all white stocking. 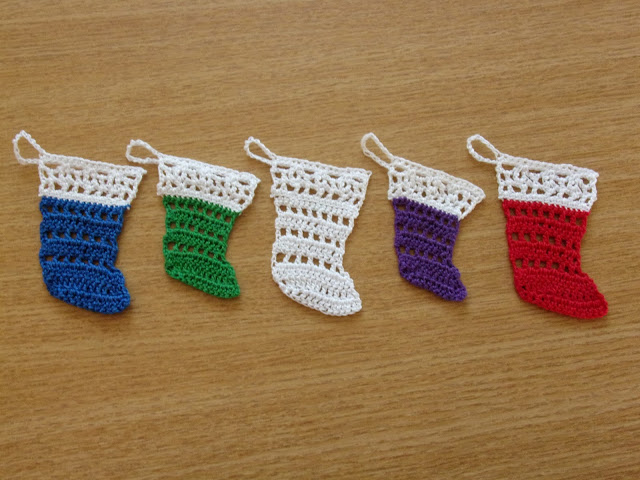 The white one makes me think of vintage crochet decorations though the pattern I used is a modern one by Caitlin Sanio. Although I prefer bright Christmas and rich jewel colours I know just the right person for a vintage style decoration like the white stocking. 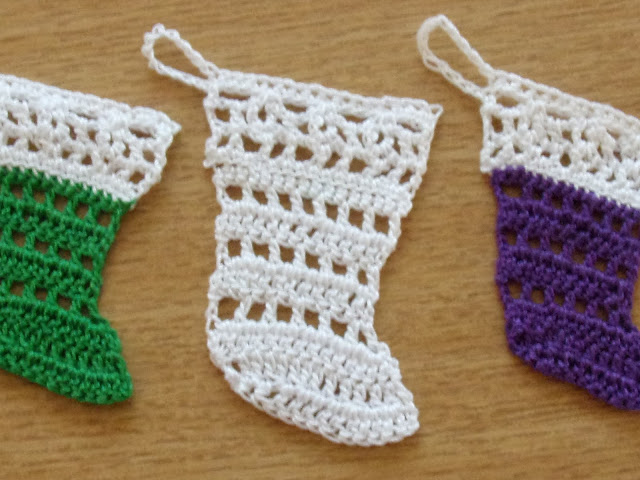 These tiny stockings are made from the top down and are worked mostly in double and triple crochet (single and double crochet in American terms). I used a 2mm hook and a mix of size 8 and size 10 threads so the stockings are not all the same size. 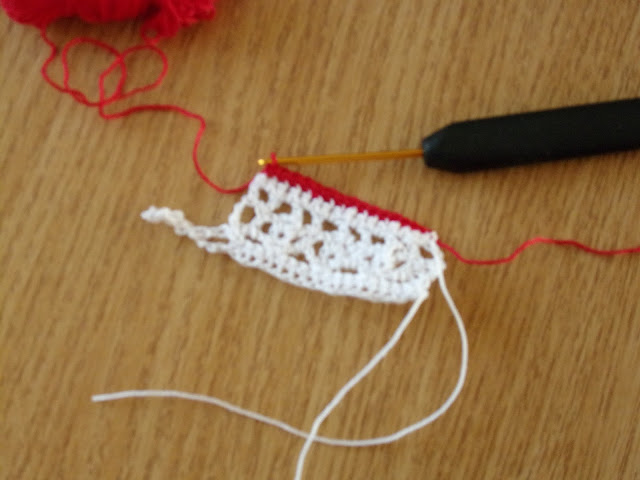 Starting with the white lacy top then changing colour to work the body of the stocking. 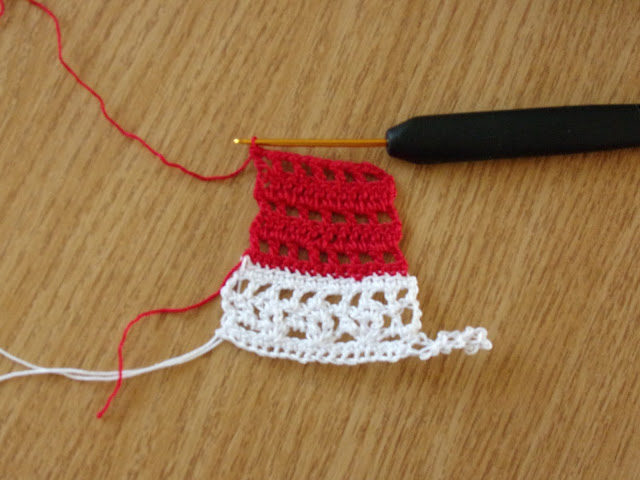 Then simple shaping to form the foot and finish at the heel. 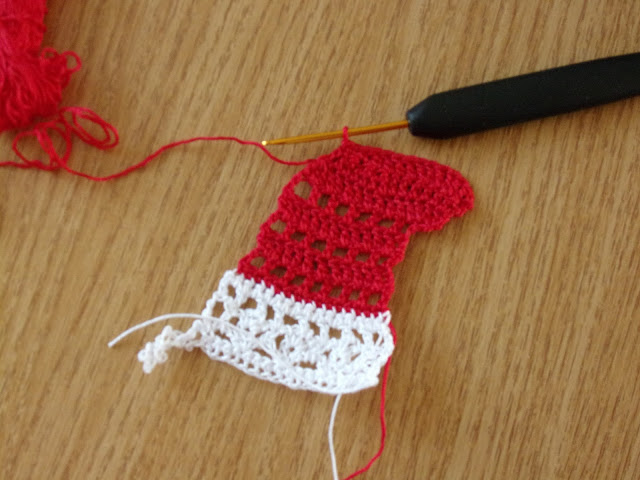 I like these little stockings, I wasn't sure about them when I made the first one but they've really grown on me. I think they go well with the nostalgic style of cards I'm using this year too. 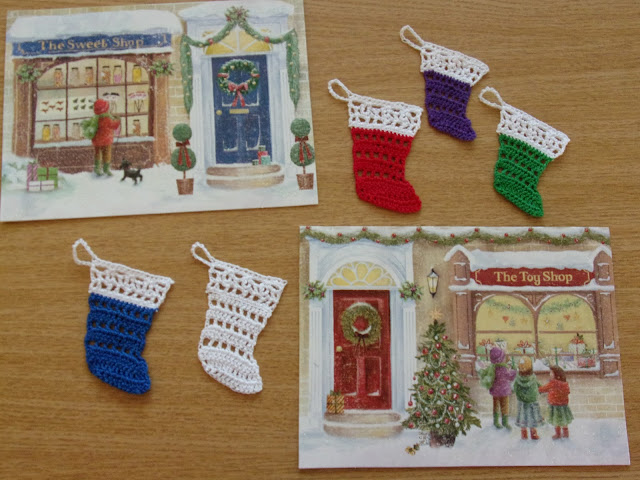 I think a bundle of these little stockings in lots of different colours would make a nice garland or they could be added to gift tags for a little something extra. I love doing this each year and am so glad I started this Christmas tradition.

The temperatures have been dropping, the nights drawing in, the trees are gloriously rich golds, coppers and reds, it's definitely autumn. Time to curl up with a cosy crochet project in the evenings and I have three current projects to share with you, a skirt, a top and a pair of socks. 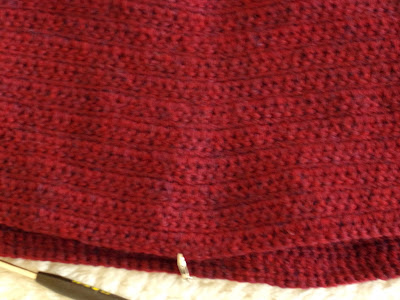 The is a skirt which I'm working in Wendy Aran yarn. I actually started this project before the summer but found it too warm to work a yarn this heavy over the summer months. I'm using a deep wine colour for the main yarn and haven't completely made my mind up yet what the contrast colour will be for the squares at the bottom. 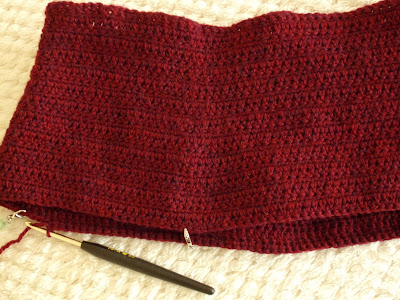 The skirt is worked from the top down in one piece until it reaches the granny squares. The pattern is this one from Drops Design.

The next project is an old make I am reworking. Originally a tunic I made for my sister, it didn't fit her very well any more and hadn't been worn much. I made too good a job of weaving in the ends on this, finding all of them to undo this has been a challenge. I had thought to make a jumper from the yarn to keep my sister cozy on her long dog walks but I'm looking at a few different patterns. 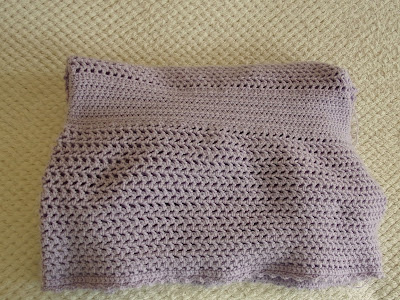 My third project is a pair of socks for N using Woolcraft Superwash Sock Yarn in shade 44. This yarn feels lovely and soft so I'm hoping it will make a very cozy pair of socks to keep his tootsies warm. While I'm using the sizing and shaping from an existing pattern I'm adding a cuff at the top of the sock and using a different stitch. 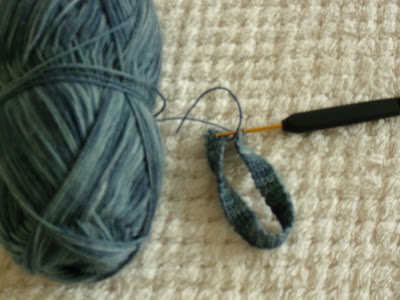 It wouldn't be autumn without fallen leaves to crunch through on country walks, hot chocolate and cozy socks. I didn't keep well over the last year or so and now that I am feeling better I am really enjoying getting back to simple pleasures and enjoying crochet again. What are you doing or making this autumn?

She loves to crochet
Hello and thank you for dropping by. My name is Helen and I live in a small town in the lovely Ayrshire countryside in Scotland. I love crafts and playing with yarn is my favourite. I hope you will join me as I crochet my way through the year.